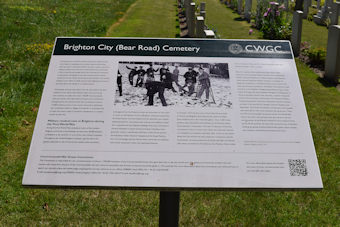 This is a large municipal cemetery opened in 1868 now closed to new burials. The wide areas of open spaces suggest many of the gravestones have been lost or grassed over. The gravestones indexed here are mainly those of the Commonwealth War Graves Commission (CWGC) from both world wars and including those of German prisoners of war and servicemen and women from commonwealth and allied countries. There is also a large section devoted to the graves of ex-servicemen and women who resided at St Dunstans, a centre for the care and rehabilitation of the blind.

The GPR holds 570 grave and 601 person records for the military cemetery.

The status of the photographing of the military cemetery is 20% complete.

There have been 13 requests for photographs from the military cemetery.

where am I: Home > Countries > England > Sussex > Brighton >Bear Road