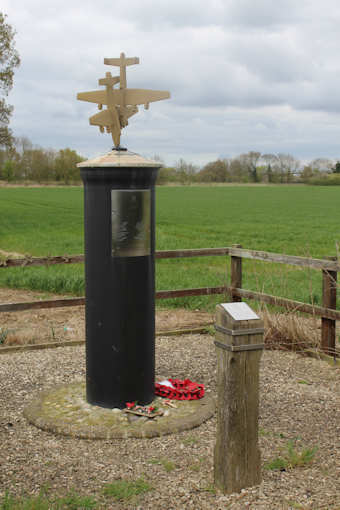 On the night of 20/21 July 1944
twenty-six Halifax bombers of No 578 Squadron Royal Air Force
took off from Burn to attack the German synthetic oil refinery
at Bottrop in the Rhine valley of Germany.
Six aircraft were lost during the raid
two of which, on their return, collided in mid air
and fell to earth near this place. These were no survivors.
The crew members were:

MAY THEY REST IN PEACE AND RISE IN GLORY

This was the most disastrous single operation mounted by the Squadron
resulting in the loss of six aircraft, the death of thirty six precious airmen
with four others being taken as prisoners of war.
A further two airmen managed to evade capture by the enemy.

The 578 Squadron Burn Association
Wishes to place on record, appreciation, respect and thanks
to the people of this area of Yorkshire
for their splendid cooperation in providing this site
and contributing the practical and financial assistance
to enable this memorial to be completed in so short a time
6 May 2006.

The GPR holds 14 person records for the war memorial.