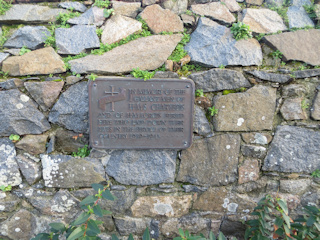 On 23 October 1943 HMS Charybdis was sunk off Guernsey. Within days the bodies of 21 Royal Navy and Royal Marines had washed up on the Guernsey coast. Although the Germans decided to bury the men with full military honours, the Islanders seized upon this as an opportunity to show their loyalty to Britain and their respect for the men who died. In all 5,000 Guernsey people attended the funerals, bringing with them 900 wreaths. A local man, William de Carteret, removed one of the Union flags that draped a coffin as it was lowered into the ground. (Carefully kept for many years it was later presented to St John Church by his widow in 1973 where along with other mementoes, it is now persevered). This was a very effective demonstration of anti-Nazi feeling and it proved to be a turning point in the German occupation of the Island. The Germans subsequently banned members of the public from attending the funerals for the additional 29 sailors whose bodies were later washed up. In all, 464 men died and 107 survived in this tragedy, the biggest single Channel loss of the war.

The GPR holds 21 person records for the memorial.

The status of the photographing of the memorial is believed to be complete.

There have been 16 requests for photographs from the memorial.

A surname list gives all the names for a particular surname and links to the memorial where it is listed (show FAQ).