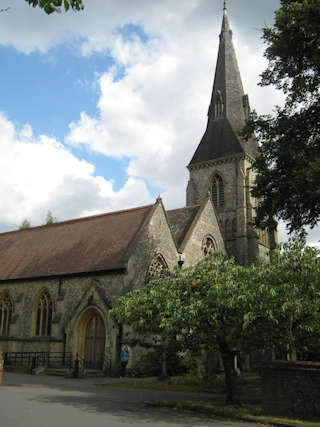 Caterham Barracks was the home of the Brigade of Guards from 1877 until its closure in 1995. The churchyard has dozens of 19th century graves of guardsmen who died in barracks, many of them only teenagers. 20th century military graves have Commonwealth War Grave Commission markers of which there are many. A notable 1892 chest tomb erected by the Officers and men of the Guards Brigade marks the grave of the last known soldier to have fought at Waterloo, an Irishman called Samuel Gibson who died aged 101. The Barracks site has now been redeveloped for housing. This site http://www.stmary-caterham.org.uk/graves-m.html has a sketch of the churchyard and an index of the first persons named on the gravestone. About 80% of the legible pre 1950 gravestones have been photographed and indexed by Gravestone Photos. Memorials inside the church have not been photographed.

The GPR holds 543 grave and 934 person records for the burial ground.

There have been 47 requests for photographs from the burial ground.

where am I: Home > Countries > England > Surrey > Caterham >St Mary