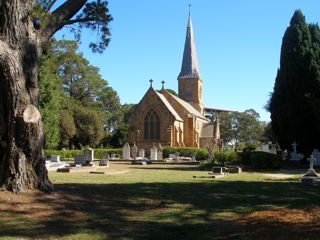 St John’s Anglican Church is the oldest church in Canberra, Australia, and also the oldest building within Canberra's city precinct.

The original church was erected by Robert Campbell. The foundation stone was laid in 1841, with the church being consecrated on 12 March 1845 by William Grant Broughton, the first and only Bishop of Australia. Sandstone for the church was sourced from quarries located at the base of Black Mountain and Quarry Hill located in the suburb of Yarralumla.

The church bells were donated by Governor-General William Sidney, 1st Viscount De L'Isle and mark his term of office (1961–65).

The mortal remains of many pioneers of the Canberra district are interred at St John's. They include the church's long-serving 19th-century rector, the Revd Pierce Galliard Smith, Colonel John George Nathaniel Gibbes, who occupied Yarralumla homestead from 1859 until his death 14 years later and Viscount Dunrossil, a former Governor-General of Australia, who died in office in 1961.

The GPR holds 184 grave and 532 person records for the cemetery.

There have been 17 requests for photographs from the cemetery.