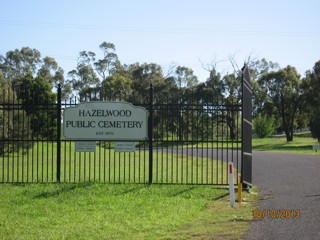 The name of the cemetery comes from Hazelwood Station, a squatting run first taken upo by Albert Eugene Brodribb and William Bennett in 1844 on the eastern side of the Morwell River. In 1860, John McMillan took over the run and it was held by the McMillan family until 1919 when it was acquired by the State Government for soldier settlement after World War 1. From a north-eastern corner of the run, 10 acres of crown land was gazetted as a cemetery on 7 April 1879, established to serve the newly settled areas encompassing Morwell, Morwell Bridge, Yinnar, Hazelwood and Driffield. Morwell's settlement started in 1877. It is highly likely that there had been some earlier burials on the site before this date. Further research shows burials taking place in 1881. These included Grace Donaldson, who at 20 died after falling off a horse in January 1881. There were 4 other burials in 1881, 3 of which were children. By 1890 the cemetery had been divided into denominational sections with the lawn section, children's section and remembrance gardens being relatively recent additions. The granite gate posts were publicly dedicated in 1948. Following the disastrous loss of life in the 1944 bush fires, a number of residents of The Ridge and immediate vicinity conceived the idea of raising funds to erect memorial gates at the Hazelwood Cemetery in memory of the 13 people who lost their lives on 14 February 1944. The gates are listed in a heritage survey undertaken by Latrobe City in 2005. While the gates remain the main entry, They also serve as a passive reminder of how fires can quickly destroy innocent lives. During the 2 decades following 1950, the cemetery experienced a lack of regular maintenance and therefore decreased usage. Towards the mid 1970's with a greater appreciation of its location and more planned maintenance, there was a resurgence in interments. While the cemetery initially served the wider Hazelwood area, today that locale includes Churchill thereby a link is forged in addition to Morwell and Yinnar. There are many members of original families from this area interred at the cemetery, therefore historical connections are retained. (Taken from The Latrobe Express, Churchill 50 years.)

The GPR holds 101 grave and 243 person records for the cemetery.

The status of the photographing of the cemetery is believed to be complete.

There have been 43 requests for photographs from the cemetery.

where am I: Home > Countries > Australia > Victoria > Hazelwood >Municipal (part 1a)