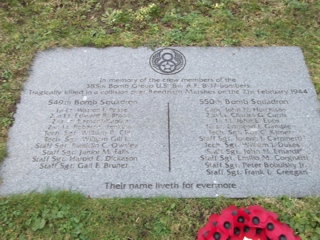 In memory of the crew members of the 385th Bomb Group US 8th A F B-17 bombers. Tragically killed in a collision over Reedham Marshes on the 21st February 1944. This memorial is located in the middle of the village near the War Memorial.

The GPR holds 21 person records for the war memorial.

The quality of the photographs of the war memorial is good.

There have been 14 requests for photographs for the war memorial.