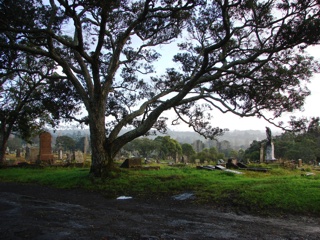 The largest cemetery in New Zealand, with over 70,000 burials. The first photo set is mainly of older burials, those with multiple names, and of badly damaged/deteriorating headstones. I am happy to photograph by request, and will be adding additional photos regularly. Full burial records available for searching: www.waitakere.govt.nz. Between 1876 and 1881 a total of 228 acres of vacant land close to the Whau River was reserved by the Crown as a site for a public cemetery. In 1886 this piece of land became the public cemetery known as 'Waikomiti'. The new cemetery was the result of a pressing need to replace the Symonds Street Cemetery, and was officially opened in 1886. Waikumete Cemetery and Crematorium now covers an area of 107.7222 hectares and since 1908 has served as the main cemetery for the Auckland Region. It is the largest cemetery in New Zealand and one of the largest in the Southern Hemisphere. The Cemetery was administered by the Auckland City Council from 1886 until 1989 when control was passed to the Waitakere City Council. Other useful material: www.stuff.co.nz.

The status of the photographing of the cemetery is 10% complete.

There have been 1101 requests for photographs from the cemetery.