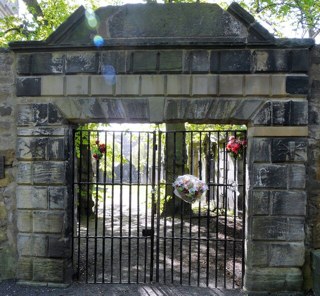 THE COVENANTERS' PRISON Behind these gates lies part of the southern section of Greyfriars Kirkyard which was used in 1679 as a prison for over one thousand supporters of the National Covenant who had been defeated by Government forces at the battle of Bothwell Brig on 22 June. For over four months these men were held here without any shelter, each man being allowed 4 ounces of bread a day. Kindly citizens were sometimes able to give them more food. Some of the prisoners died here, some were tried and executed for treason, some escaped, and some were freed after signing a bond of loyalty to the Crown. All those who were persecuted and died for their support of the National Covenant in the reigns of Charles II and James VII are commemorated by the Martyrs' Memorial on the north-eastern wall of the kirkyard. The Covenant, which was first signed in Greyfriars Kirk in 1638, promised to defend Presbyterianism from intervention by the Crown. In November 1679 the remaining 257 men, who had been sentenced to transportation overseas, were taken to Leith and placed on board a ship bound for the American colonies; nearly all were drowned when this ship was wrecked in the Orkney islands (where there is a monument in their memory), but 48 of the prisoners survived. The section of the kirkyard used to imprison the Covenanters lay outside the existing south wall, and included the area now covered by buildings on Forrest Row. The area behind the gate was laid out for burials in 1705 and contains many fine monuments, but these did not exist at the time of the prison.

The GPR holds 39 grave and 219 person records for the private cemetery.

The status of the photographing of the private cemetery is believed to be complete.

The quality of the photographs of the private cemetery is good.

There have been 107 requests for photographs from the private cemetery.

A surname list gives all the names for a particular surname and links to the private cemetery where it is listed (show FAQ).